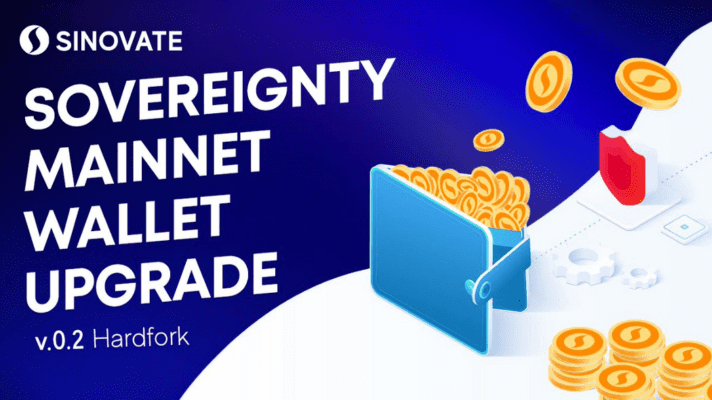 The SINOVATE (SIN) mainnet upgrade will go-live at block height 330.000 (taking place on 16/01/2020), which successfully resolves network issues to be discussed in this article. In anticipation of the upgrade, our R.S.V. E-Governance Core Walletwas recently released. Updating current wallets to the latest version is mandatory, which community members must do prior to commencement of the upgrade. Also, please ensure instances of the mncache.dat file are deleted.

What does the upgrade mean for Node owners?

I run an Infinity Node. What do I need to do?

Infinity node holders initially need to upgrade their VPS wallets, followed by the PC wallet and then start alias. The SIN blockchain does not need to be resynchronized from scratch. Please back up the wallet.dat and node config files, and run the newly created .exe over previous versions. Once the synchronization process is complete, insert the wallet.dat file here:

The below VPS update instructions must then be followed:

Upgrading the infinity node VPS ensures your node is on the correct chain. In order to set up a new node post-upgrade, please follow this guide. This will enable infinity node owners to become familiar with their backup address. Newly created nodes must contain a backup address, in order to safeguard against future hacking threats. Implementation of this feature will take place during the next upgrade. Community members are encouraged to contact our support team via Discord orTelegram, should they require assistance.

Why is the network upgrading?

For all those who may be unfamiliar with our excessive infinity nodes and reward generation issues, please see the recap below. Further details can also be found here:

SIN community members are familiar with our 375 Infinity Node limit across three tiers, as well as recent reward generation issues. Old SINOVATE core wallets (these have been removed from GitHub) have been used to burn SIN coins and create new nodes, which exceed permitted levels. This has resulted in instances of network and node instability, with excessive nodes also at risk. As node issues were likely to continue, this needed to be addressed as soon as possible. Therefore, the SINOVATE team brought two solutions to vote, both of which required a hard fork (mandatory upgrade and start alias of nodes):

Solution One: When you vote No

The node limit will be increased, which carries the risk of network and node instability issues reoccurring. An additional hard fork would also be required, which is an extremely time and resource-consuming process.

Solution Two: When you vote Yes

Node limits will be removed, solving all instability issues for good. Minimum guaranteed interest will reduce. However, the SINOVATE network will contain more nodes, causing a decreased circulating supply of SIN coins with fewer emissions. Since a new cycle is created every 12 months, the beginning and end of these will provide a high return on investment for node owners.

The SINOVATE community unanimously voted in favor of Solution 2. Voting initially took place on our Discord server, and latterly via the R.S.V. E-Governance Core Wallet.The SIN team agrees that this is the best option available, both for the immediate and distant future of our project:

Who is entitled to receive rewards?

Missing rewards will be reimbursed from block 330,000. This form must be completed, in order to claim SIN coins.

However, soon after the E-Governance Core Wallet was released, we came to realize that community members unaffected by the excessive node issue were posting their wallet addresses for reimbursement, which they are not entitled to.

For the sake of clarity, reimbursement is not for upgraded wallets. This does not constitute a bounty campaign or giveaway, and only serves to appropriately reward impacted network participants.

How will missing rewards be distributed?

When a hard fork takes place and the network infrastructure of the SINOVATE blockchain changes, all wallets, including participating nodes must be upgraded. This process must be carried out by all node owners, to ensure a level playing field is maintained throughout the SIN network.

No rewards will be received within the first two days of starting a wallet alias. Daily received rewards will be calculated. In order to ensure equality and fairness for all, excessive rewards will be deducted. The SINOVATE team created the following idea, in order to simplify the distribution process. All reimbursed rewards, as voted by the SINOVATE community will be paid via the development funds wallet as follows:

Wallets that have received greater than 54.98 SIN rewards will not be paid, with all wallets which received less than 54.98 during the above-mentioned dates accordingly paid the difference. Inactive nodes that did not receive any rewards during this period will also not be paid.

Nodes burnt after the 375 limit do not qualify. Thus, all excessive nodes (1 BIG and 6 MID SIN Nodes) will not be reimbursed.

Due to limited funds, payments will be spread weekly, with the first payment commencing on Monday 27th January.This payment will be specific to Little SIN nodes.

All remaining payments will be divided into nine-week installments as follows:

Voting for the above proposal took place via our Discord server. As polling results were conclusive, it was unnecessary for additional voting to take place via the new wallet.

The community has spoken, and we have listened. We will begin the reimbursement process of all missing rewards, as soon as the network upgrade is officially implemented. Issues experienced only strengthens our resolve to succeed. Thank you for your fantastic support.

Join us and stay tuned for all forthcoming updates via our website and social media platforms: